This page lists all the major updates in our software that have been recently implemented. The full and detailed changelog is available in our forums (there are hundreds of minor changes and updates, and we're listing only the biggest ones here).

Note: This page is currently not up to date (sorry!). Please consult our forums and news for the list of latest updates.

All in-game maps (airport, airline and route information) have been replaced with new a system.

Various changes to settings and rules in start phase of scenarios to create a better balance, including changes to aircraft purchases and starting money.

Improvements to transparency of aircraft sales between players.

A new airport classification system is introduced, the old and fixed 5-step level system is replaced with a dynamic and responsive classification. The size classification comes now in two values: Traffic Level and Infrastructure Level, both have 10 levels (1 - 10). Making airports more dynamic is one very important component of the City Based Demand system.

Cargo and City Based Demand is here!

The long awaited cargo features are now introduced in AirwaySim. Cargo can be transported in the baggage holds of the regular passenger aircraft, together with passenger bags, but also with dedicated freighter aircraft. The belly cargo in the freight holds of normal passenger flights is the most common option.

City Based Demand is a fully new system on how the demand values are created. The demand is no longer tied to airports but is instead generated by the areas and cities and airports serve only as the gateways. For now it serves only cargo but will be later implemented to passenger travel too.

Better modelling of some real-world events.

The list of size classes for aircraft fleet groups (e.g. small, medium, large or very large) has been updated for better game balance.

Several small adjustments have been made to economic factors. The background data for real historical inflation, interest and fuel price data has been updated with fresh data.

New game worlds extended up to 2036

The master settings have been updated so that extending game worlds up to year 2036 is now possible.

A big list of minor updates to the interface to give better usability and easier access to some features (see changelog for details).

The ability to convert full aircraft schedules from one fleet group to another with a single click (by moving the schedule from aircraft to another), without the need to edit routes individually

The events module has been expanded with the possibility to create pre-scripted events, such as 9/11 or other similar major events around the world.

Added option to give "one-time bonus" to your staff.

The airline CEO can be be paid one-time or recurring quarterly bonuses based on the airline performance. 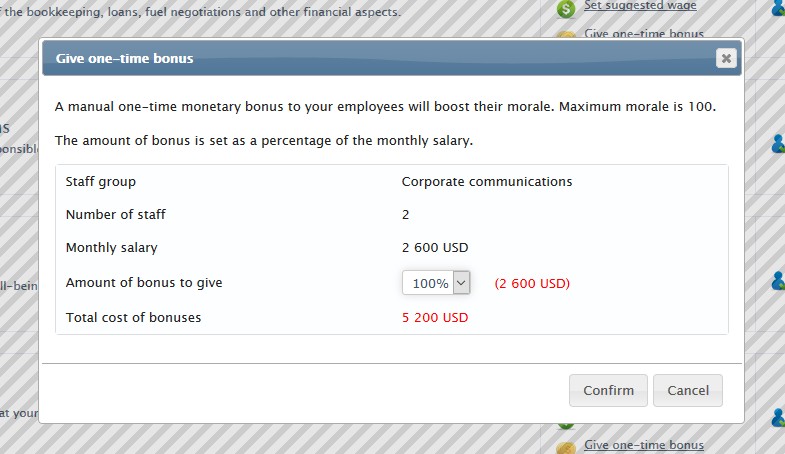 A virtual advisor will now tell you if you are about to do something "stupid", like lease an aircraft that is not very good for your use. 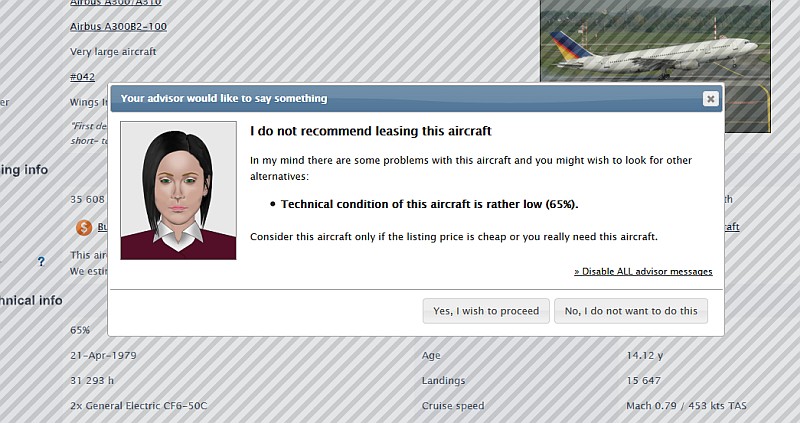 Players can now assign a description text of their airline.

The maximum amount of members per each alliance is now related to the player capacity of the game world, up to 40 members per alliance.

A new feature that allows you to join a new & upcoming game world before it has started. With this change it is now easier for players to book their slot for the new game and get reminded when it opens. 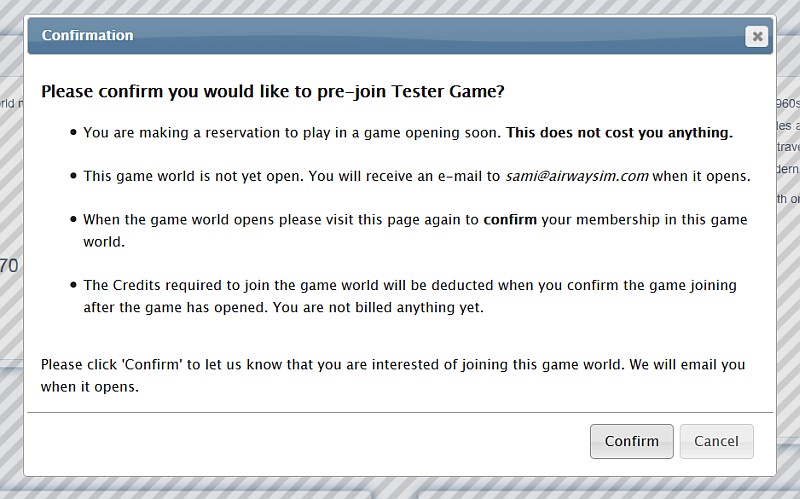 New Achievements added and many existing updated with new levels.

The handling of airline press releases in the game interface has been improved with more formatting options and image features. 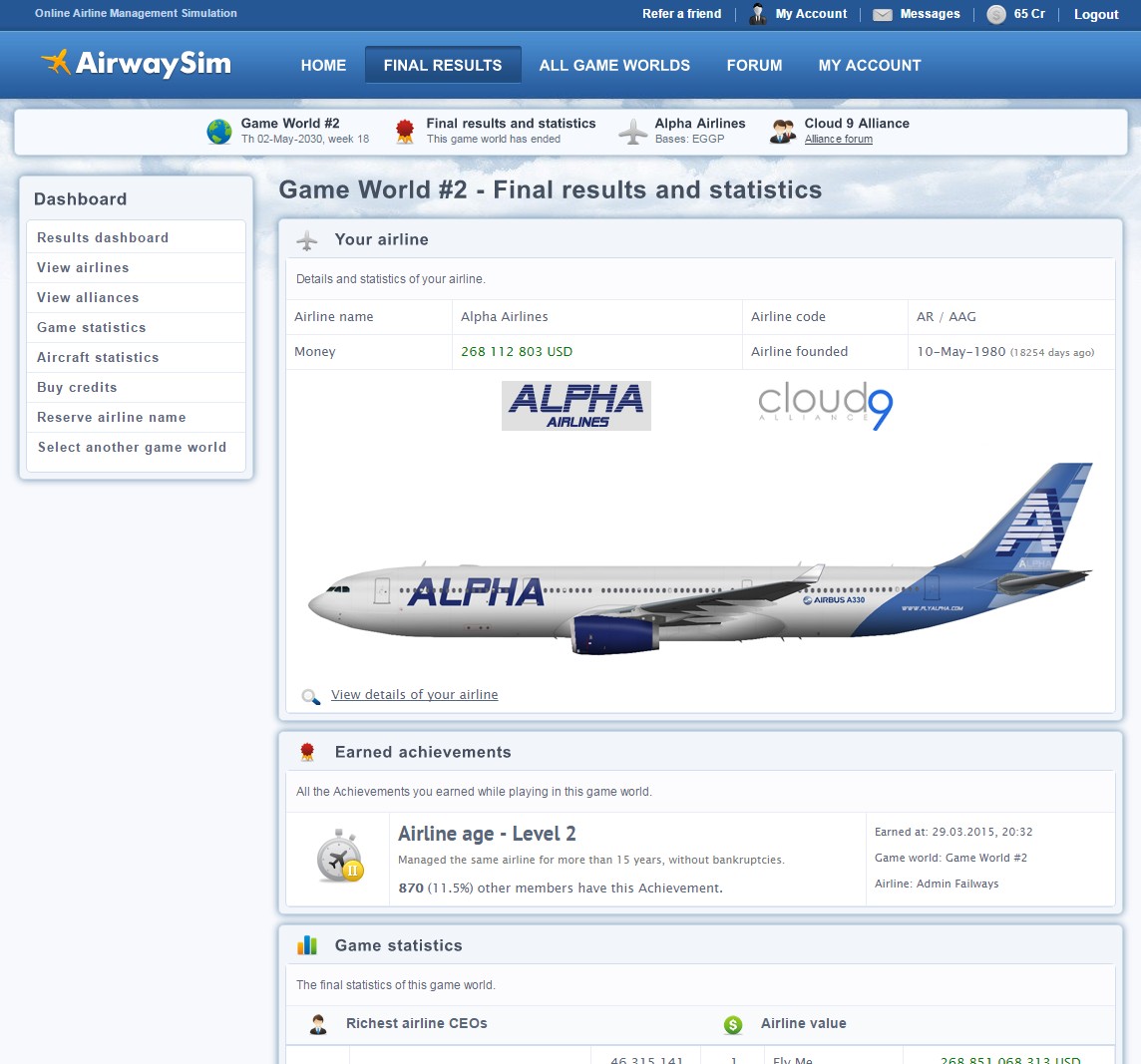 42 new airports to Canada and Africa added, with updates to other airports too.

Players may set a minimum required technical condition for the airplanes they lease out to other players.

Leased aircraft may be now sent to the long-term storage ("desert parking").

World events have been updated with images and new random events.

Creating a new airline has been updated with a new "easy start" feature. You can now get going with your new airline faster and easier than before. All players can now choose a start-up option where the system automatically generates the basis of the new airline. This includes first two or three aircraft operating on routes that have enough passenger demand potential, full aircraft route schedules, company marketing, staffing and all other necessary start-up steps. 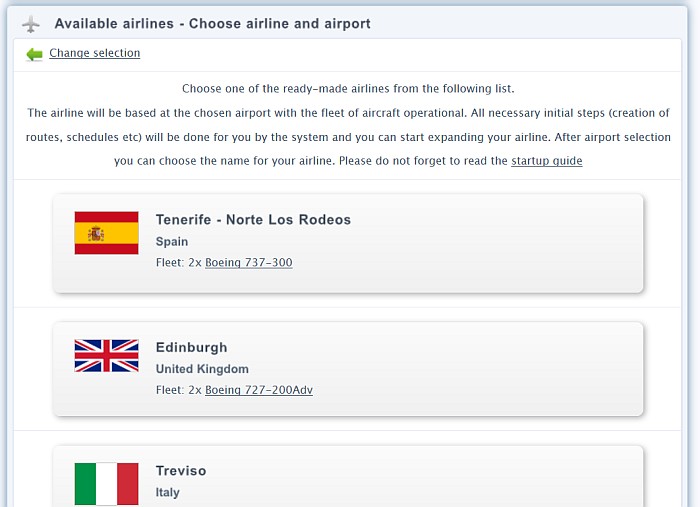 A set of features has been created to help new airlines to get their operations started in existing/established game worlds. These new airline boosts consist of operational discounts (airport fees) and small boosts to airline image values (company image, route image..). 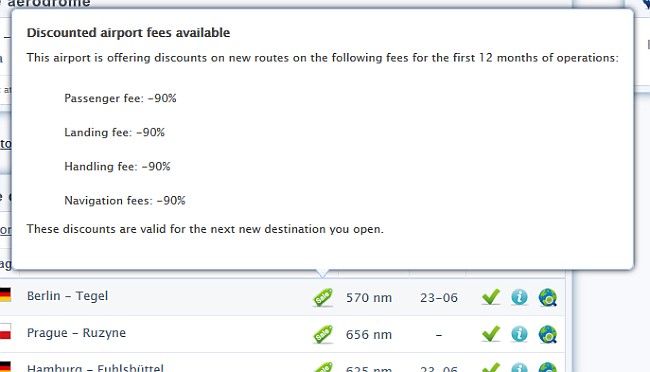 Major events of all game worlds are now published into our Twitter account, and can be also subscribed as a RSS feed. 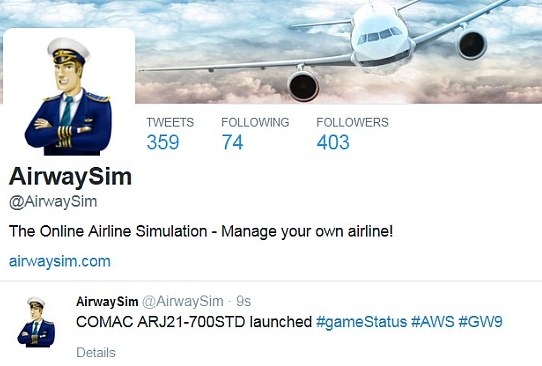 This feature adds the aircraft noise limitations to airports disallowing operations with very old/noisy aircraft to some airports. The limitation rules follow the real-life restrictions and for example Europe and US require a "Chapter 3" noise certified aircraft during the modern era.

New combined aircraft information and data overview page added. The page collects together all the basic information of an aircraft model (such as the basic technical details and basic production details), added with information about the largest operators of that aircraft and a complete fleet production list (history of all aircraft ever produced). 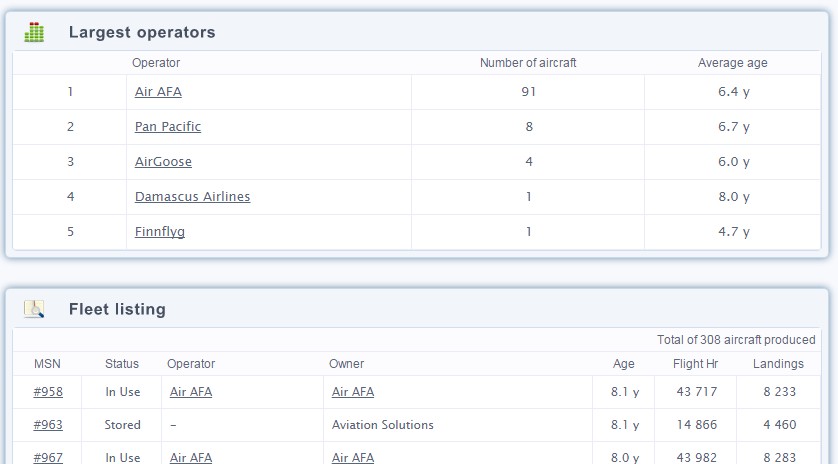 "Free preview" period of game worlds extended from 15 minutes to 30 minutes. Players can explore the game worlds for 30 minutes without cost (= leaving the game before that returns the initially used 5 Credits).

Change to game rules: Two airlines of the same alliance may not base at the same airport. This goes for both HQ airports and for additional bases.

A completely new feature that aims to compare airlines based on various key statistics.

"Vacation mode" added, allowing you to leave your airline unattended without the fear of being closed by inactivity.

Possibility to disable all e-mail notifications about your airline (no warnings of bankruptcies or other very important events to your e-mail).

Staff salaries are now paid daily instead of once a week (to avoid big sudden payments.

Base airport rules changed. The additional bases are now available after airline is over 180 days old and has 5 or more planes in use.

B checks are now performed every four weeks instead of only on the last week of each month.

Dynamism in new aircraft list prices has been increased.

The dissolution of Netherlands Antilles is now modelled correctly.

Several chapters of the manual have been updated and new chapters added.

The aircraft database includes models that have not yet flown in real life ("prototype models"), such as these two.

This feature allows you to upgrade your aircraft by installing for example a hushkit to the engines which raises the noise certification level, and in turn allows you to operate the aircraft longer into the future (we shall also introduce noise level limitations soon as a new feature - this means that you cannot fly a B707 in year 2000 for example anymore unless you equip it with the hushkit).

Upgrades are only retrofit items that can be installed to existing aircraft and not related to new aircraft orders. Each upgrade may also change the range, fuel consumption or runway requirement. 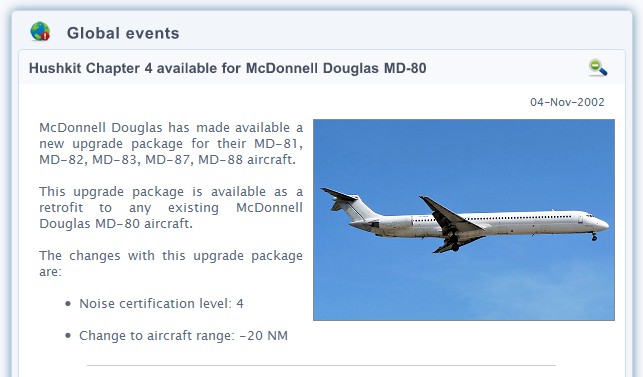 This is a prediction of the future and it is based on your staff's efficiency and it's their opinion about the future development of the prices. The future prediction has two lines: "low" and "high" and the future price will most likely be somewhere between these two. You can use this information to spot any radical trends and changes in the near future and plan your hedges accordingly. 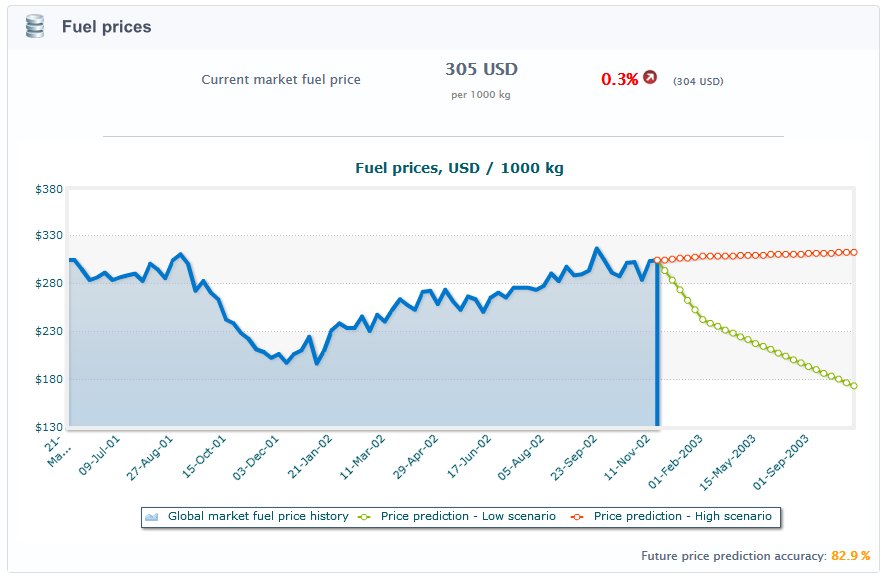 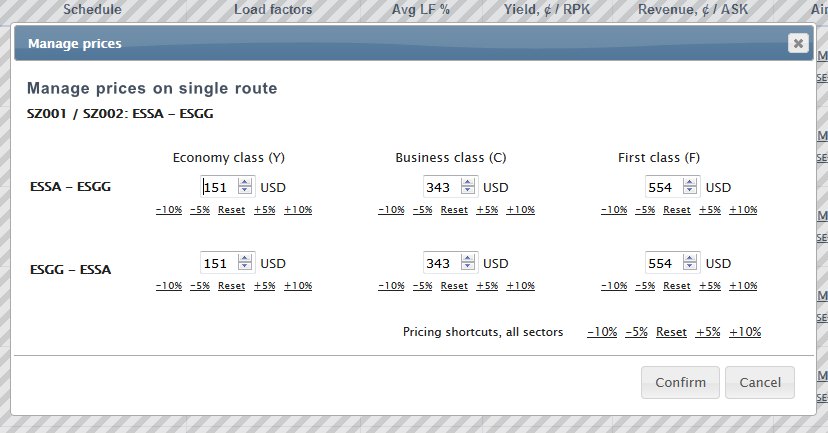 Updated base airports feature with base levels

The airport bases feature has been renewed completely. Each airline can now base at 10 different airports (HQ + 9 bases).

There is a major new component to the bases feature, which is the base level. This determines the operation size and cost level of the base. There are 4 base levels corresponding to the aircraft size classes (small, medium, large, very large); 4 levels of bases. The base size equals the largest allowed aircraft size class for your operation in that base (= medium class base can support small/medium planes, and very large base can support all planes etc). The base levels can be up/downgraded as needed.

There are also numerous rule changes. There are no aircraft limits other than a companywide limit on aircraft scheduled outside your HQ (in bases), and the max. number of aircraft outside HQ is relative to game year (max. 600).

This update allows small airlines to expand more easily as "base levels" 1 & 2 are very cheap to open and operate. 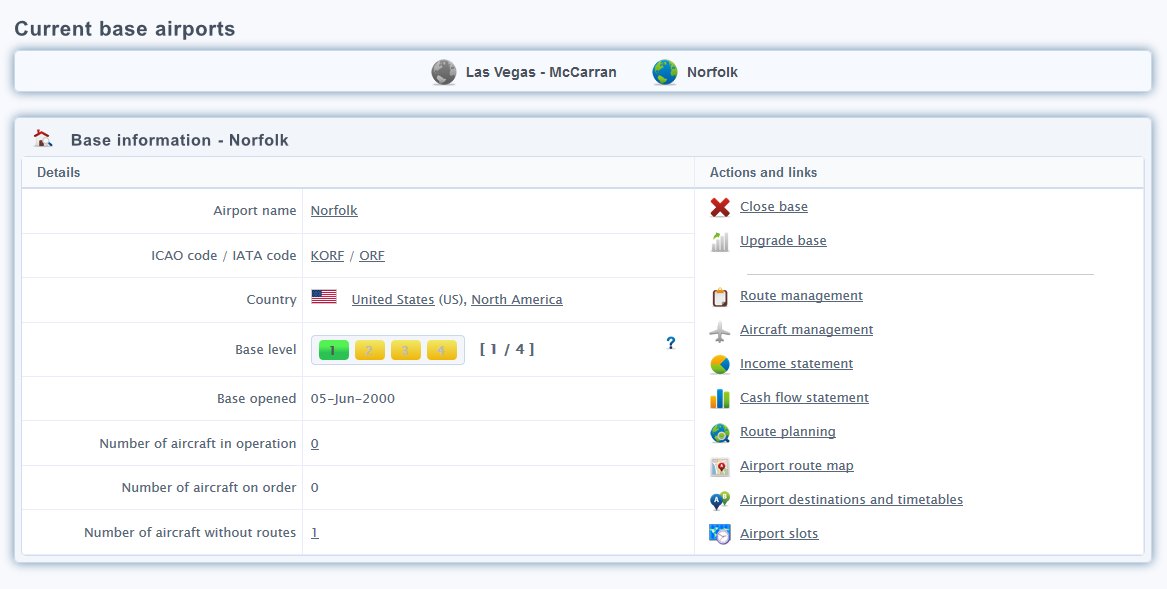 Dashboard page has been re-styled completely. This is a large update where the aim is to clarify the news feed and avoid large long scrollable pages.

There are about 50 pre-programmed events that each have a detailed background story on how they affect the airline operations. The events can create delays, cancellations or changes to passenger demand, and they can affect only one airport, all airports in country or all airports in whole continent. Events can be also customized by the administration. Events can be very major ("volcano eruption") or very small ("minor delays due to bad weather"), and anything in between. 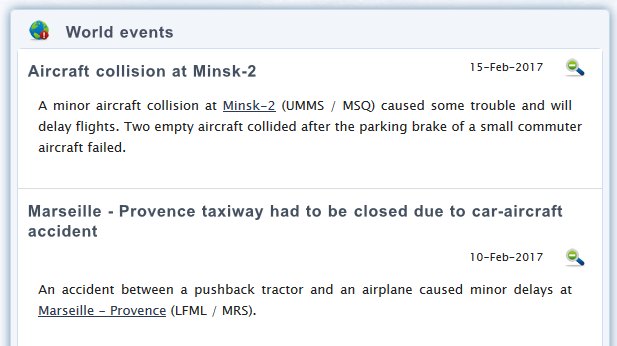 The starting capital (cash) for new airlines is now more dynamic (and usually bigger). The amount is tied to inflation and game progress; the later you join, the more money you get proportionally to start with.

The staff requirements of airlines flying with small or medium size class aircraft are now proportionally much smaller than before.

Airport slot prices for new airlines have been greatly adjusted to make the start-up phase easier.

New model of calculating the value of your assets and depreciating the expenses over time, three new powerful financial reporting pages (balance sheet, income statement and cash flow statement) and many other changes.

Financial reports of each airline are also visible to everyone on each airline's information page. 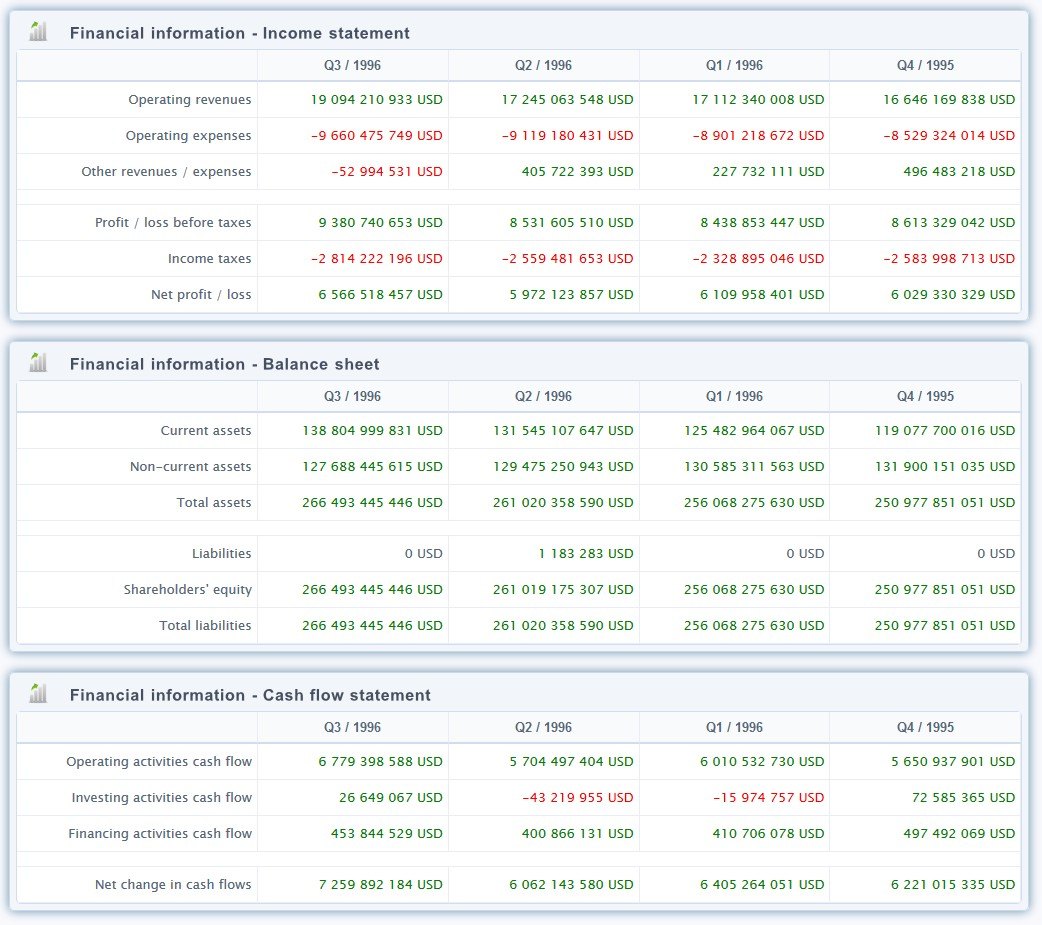 This feature allows you to park aircraft into "desert" for later use. Useful if you do not wish to sell the aircraft etc.

You can now move your pilots between groups by paying a one-time re-training fee for each pilot you convert.

The separate and limited Demo game worlds have been removed. New users can now enjoy a fully featured 7-day free trial at the Beginner World scenario. After the trial it is possible to seamlessly continue playing with the same airline by purchasing Credits.

Finding the base airport is now even more easier thanks to this new airport finder wizard tool. Simply choose your desired continent and type of airline (regional, mediumhaul, longhaul) and the wizard will go through each and every airport picking some suggestions for you to choose from. 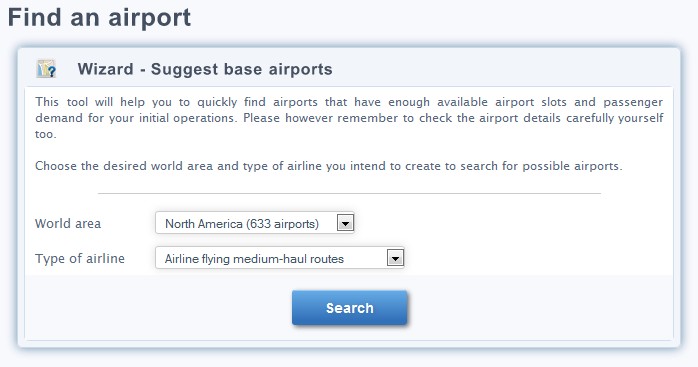 WARNING! This website is not compatible with the old version of Internet Explorer you are using.

If you are using the latest version please turn OFF the compatibility mode.